My Winter of Discontent Followed By A Breakthrough 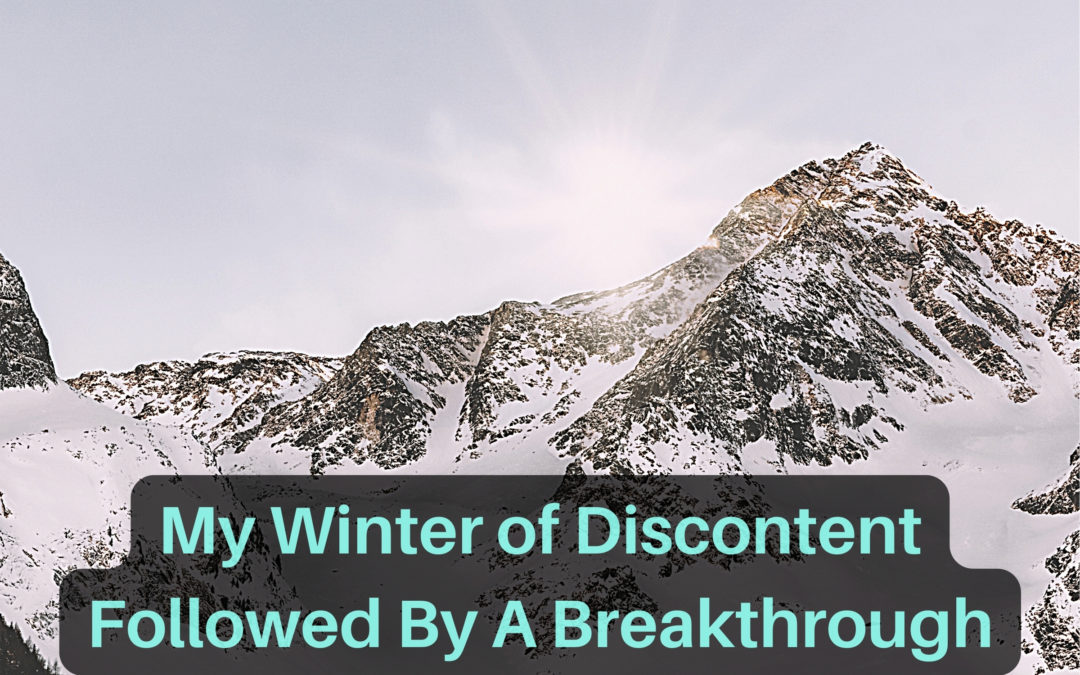 We were being actively and intentionally deceived. Moving beyond the typical spin to full-propaganda. People drunk on an insatiable thirst for money and power systematically tossed the welfare of those they swore to protect out the window.

And what about the people?

Well, decades of complacency had lulled the masses into a precarious state of false security. Because “Nothing really “bad” could ever happen here, ya know”

I mean, as long as I can snap my “selfies” with the perfect filter, grab a cocktail with my besties… and go on vacay… who cares?

“We’ll get back to “normal” sometime.”

One year ago, my soul knew we were NOT fine.

THIS is NOT fine.

I remember it clearly…for the first time in months, I was glued to the TV watching events unfold. As they did, I felt like I had taken off a piece of siding from my house, only to find my entire home…my safe space- completely RAVAGED by termites.

Everything had been slowly and methodically gnawed away, to where the whole freaking house was hanging by a thread.

One year ago … my soul felt crushed.

Fear intensified as I thought about my three babies that I had prayed for for 7+ years.

Fear predictably moved to feelings of despair and hopelessness. 😢

{side note, I’m feeling a little 🤢 as I write these words. It’s never easy to admit being in such a dark place, but I don’t care what anyone thinks about me at this point, I just want to share my heart in this… }

I kept thinking…”Who was going to step in and save us? Surely not everyone is compromised!”

There has to be a group of individuals fighting for us, right?

This wasn’t how the greatest freedom experiment ends, or is it?

History repeats itself and I had a stirring in my Spirit that the Good Book contained a lot of history and wisdom to help me navigate these tumultuous times.

After all, we aren’t the first to be in a time where evil is running rampant….

{I know this is heavy….but to know where I’m being led I have to give context…. 😉}

One day in February I made a life altering decision.

I likewise wouldn’t bury my head in the sand hoping that if I ignored stuff it would go away.

I decided instead to turn my focus upward.

On the unshakable, eternal promises that I could truly rely upon.

And as always where my focus goes, my energy flows. Peace replaced fear and uncertainty. Abundance flowed in place of fears of scarcity and lack.

I had a front seat to witness miracles unfolding in my life and the lives of others.

Best of all, I finally felt FREE.

Free to be the person I was meticulously and fearfully designed to be.

But what does this mean for 2022 and my personal vision for the year?

This year is one that is critical for people around the globe.

I’ve been blessed with the gift of sharing inspired messages so I’ll be going ALL IN on sharing them this year. I was not placed here in these precarious times to try to fit in and gain the approval of others.

White Space Week enabled me to uncover my newest mission.

I’ll save that for my next installment.

But let me just say- it’s the biggest one yet.

It won’t be easy. But humanity is in a battle of epic proportions and I, for one, will NOT be sitting on the sidelines.. 💥