Are Your Beliefs Limiting You? 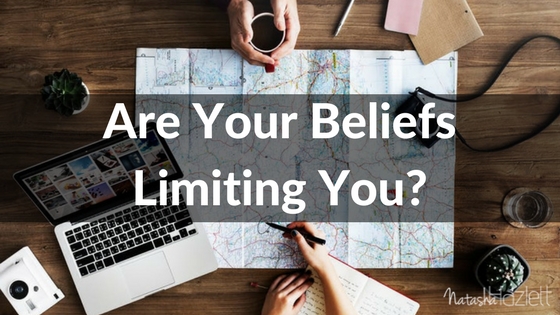 Let me ask you something…  How often are you questioning your own beliefs?

Some of you question your beliefs a lot… you’re also the one who questions the status quo… you little rebel!

The reality is, though…most of us aren’t even open to the notion of changing our beliefs.  Our belief are our beliefs.  We aren’t inclined to change them (assuming we’re aware of them).

Watch the Video For The WHOLE Scoop


Stick with me here…most of the time the most dangerous, sabotaging limited beliefs are hidden deep down in our subconscious.

They totally direct ALL of the decisions we make, and we aren’t even aware of it!  (How crazy is that?!?)

It’s kind of like when you’re driving somewhere, and then when you get to your destination, you’re like… “Dang…I’m here already?  I barely even remember driving here!”

(Admit it…it happens to you too!)

Let me give you an example of a limiting belief that stopped me from losing weight for YEARS!

How Limiting Beliefs Can Stop You From Losing Weight

For years and years (like 8 of them) I kept gaining weight.  I would try a diet, lose a little then gain it all back (and then some!)

When this would happen, some thoughts would pop into my mind…

These excuses stopped me from even ATTEMPTING to really lose weight.

One day I recognized these thoughts for what they REALLY are.

They are not TRUTHS. They are stories I’ve made up, and played over and over again in my head.

Those nasty little buggers STOPPED me from being my very best self.  They stopped me from sharing my message in a big way.  They were messing with my mission in life.

Once I realized that- I knew that I had to do something about it.  I had to CHANGE that belief.

And guess what friends?  You CAN change them.  That’s the FAB news.

Well, if you’re stuck in a rut like I was…the first step is to:

What are the things you’ve been WANTING to change, but haven’t?

The things that are holding you back are probably those darn limiting beliefs!

So sit down and make a list of all of the reasons you haven’t done what you need or want to do.  Then for each once- decide… Truth or B.S.

If it’s B.S. it’s time to get to work on changing the story you’re telling yourself.

At the end of the day- if you keep identifying and reprogramming your limiting beliefs, you can literally TRANSFORM your life… I should know, because that’s exactly what I did :)

Did this article and video inspire you?   Have you kicked your own limited beliefs to the curb?  If so- I would LOVE for you to share your thoughts in the comments below and make sure to share this video with someone you care about!

In the meantime, stay tuned for more :)